So last week I was really craving something a bit different, yet something that wasn’t so wild that it stopped being appealing to me! As usual, I relied on Google for some inspiration and I was pointed towards Penang. Penang offers a Malaysian cuisine, which is quite similar to other East Asian restaurants I’ve enjoyed such as Cocochan, but Penang serves the signature Malaysian dishes you aren’t likely to have tried elsewhere that also serves halal food. So my friend ND and I went to Westfield London, which aside from having plenty of shops, also houses a wealth of fat options to feast upon, like the mini pancakes from Dunkers Co., crepes and fresh doughnuts to name a few; what more could you ask for?! It became quite depressing knowing that you can’t physically devour all of these things without spoiling your appetite for dinner, so we had to settle for some Original Glazed doughnuts from Krispy Kreme after our meal.

But anyway, enough day dreaming about mini pancakes! Penang has a very casual and relaxed environment. The restaurant was slightly busy, but we were seated straight away.  Having had a look at the menu online, which we later found is slightly outdated btw, we knew what we wanted and were served very quickly.

For drinks we both opted for the virgin mojito. Very refreshing, but we both agreed it was slightly too minty. The really strong aftertaste took away the fresh, lime flavour.
I’ve only had a mojito mocktail from one other restaurant – Al Souk in Gants Hill, whose Mojito I found to be a lot better than Penang’s. Perhaps it should have been a bit sweeter!

Four delicious skewers of chewy, lamb pieces full of flavour, the satay was hands down Penang’s best dish of the ones we chose. The lamb chunks were covered in a delicious seasoning and came with some peanut sauce, which wasn’t like peanut butter as I imagined it to be. The sauce was a bit disappointing so the lamb definitely tasted great on its own.

I love gyoza; chicken or prawn, I always love ordering some variation of the dish. The soft, doughy texture on one side and the slightly crispy pan fried texture on the other, all sandwiching some meat makes me drool!!
Penang’s chicken gyoza was impressive. It’s a dish that can sometimes taste a tad bland because of the dough, but the chicken and vegetables inside combined to create a nice flavour. The sweet chilli and ginger soy sauce  (made in-house by Penang), served alongside the gyoza, made the difference and this dish didn’t last that long!

We were looking forward to prawn gyoza after seeing it on the online menu, but sadly the menu is outdated and the gyoza is no longer available, so instead we got the prawn spring rolls.
The rolls were a bit bland and the shell was crisp as you’d expect, but the prawn chunks themselves weren’t as flavoursome as the other dishes. The sauce didn’t do much to add to that either.

We also got duck spring rolls and I didn’t realise there were meant to be vegetables inside too, until I was writing this review.
I was hoping to find that lovely chewy and crispy texture of duck inside, but with the added vegetables it was a bit gooey and a slight let down when I bit into the spring roll.

I was really looking forward to this classic Malaysian dish and it was impressive, but not quite amazing. We went for the chicken variation and unfortunately the chicken pieces tasted a bit dry and bland among all the other ingredients such as the Chinese cabbage, carrots, spring onions and so on, which all worked really well together. The chicken could’ve done with some more flavour, but I’d still highly recommend this dish.

As soon as we were seated I noticed a lot of our fellow diners were Malaysian and I’ve always thought as a rule of thumb that if a restaurant is busy with natives (who would obviously have great taste for their own food) it must be good. Whether that is Turkish people in a Turkish restaurant or Indians at an Indian. And I don’t think Penang was an exception to that rule. The service was fast and the food overall was very satisfying.

Another point to mention is that at many restaurants offering dim sum, dishes are served in portions of 3. Penang serve dim sum, and spring rolls alike all in portions of at least 4. The total bill came to just under £40 including service, and while I wouldn’t say £20 per head is something to shout about in terms of value, you get a bit more for what you pay compared to other Far East cuisines in London, such as Cocochan.

ND and I both left impressed by Penang. Their food wasn’t jaw-droppingly good, but easily tasty enough to say I will definitely be returning. (Not just for Dunkers Co. mini pancakes!) 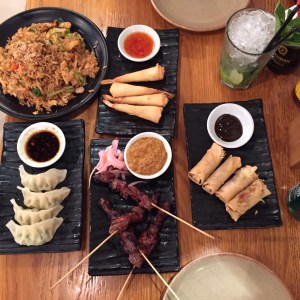