I have just realised I haven’t reviewed Stax Diner, which I have visited countless times because I absolutely love it. I think I never bothered because I’m pretty sure most of you have heard about it. If you haven’t… then either go and check it out, or check out Boondocks, their brand new sister restaurant which just opened yesterday! I headed off to their soft launch and had a really fun evening with fellow bloggers Steak and Teeth! 😀

The restaurant is a lot bigger than Stax, which is great! It has two floors and is beautifully decorated! Check it out…. Boondocks was set to open at 7pm, however due to a huge queue we only got seated at around 8.45pm! (Awks when I told my mum I would be home at 9pm… sorry Mum)! The wait wasn’t so bad as we were busy chatting away and was really fun! It also gave me time to drool over the menu.

We decided to order milkshakes while we wait, only to be told that they’re only going to start serving them in 2 weeks!!! *sigh*. We opted for mojitos instead. The mojitos were quite nice but nothing to shout out about. I later got a raspberry mojito, which I thought could have been mixed better as I had random slurps of syrup every now and then. Steak and I insisted we wanted a large portion of nachos, which sadly we didn’t finish as it was huge! The nachos were nice but I would have liked a bit of a kick to it, perhaps with added jalapenos or salsa sauce. Good but not amazing wings. We weren’t rushing to finish these and there was too much sauce for my liking.

Boondocks has a lot of items from the Stax menu, and as much as I love them I wanted to try something new. I opted for the sloppy joe. Who remembers how good the sloppy joe looked from the film It Takes Two? I couldn’t wait! It was super messy but yummy! This burger is from the Stax menu and is absolutely delicious. A juicy burger, with gooey cheese, and crispy maple glazed beef bacon! It is one of my favourite burgers in London. Thanks Z for letting me have some 😀 Teeth opted for this monster of a burger, which consists of a beef patty AND chicken fried steak! I wasn’t too sure about this overload of meat but he said it was really good and enjoyed it! By now we were absolutely stuffed, but obviously somewhere inside there was room for dessert! The dessert menu at Boondocks is insaneeeee and I was not going to leave without trying something. We ordered s’mores, which we could toast on our table! How cool! The dessert comes with halal marshmallows, chocolate coins and actual graham crackers! I’ve never had a proper graham cracker, as you don’t usually get them in the UK.

A post shared by My Big Fat Halal Blog (@mybigfathalalblog_) 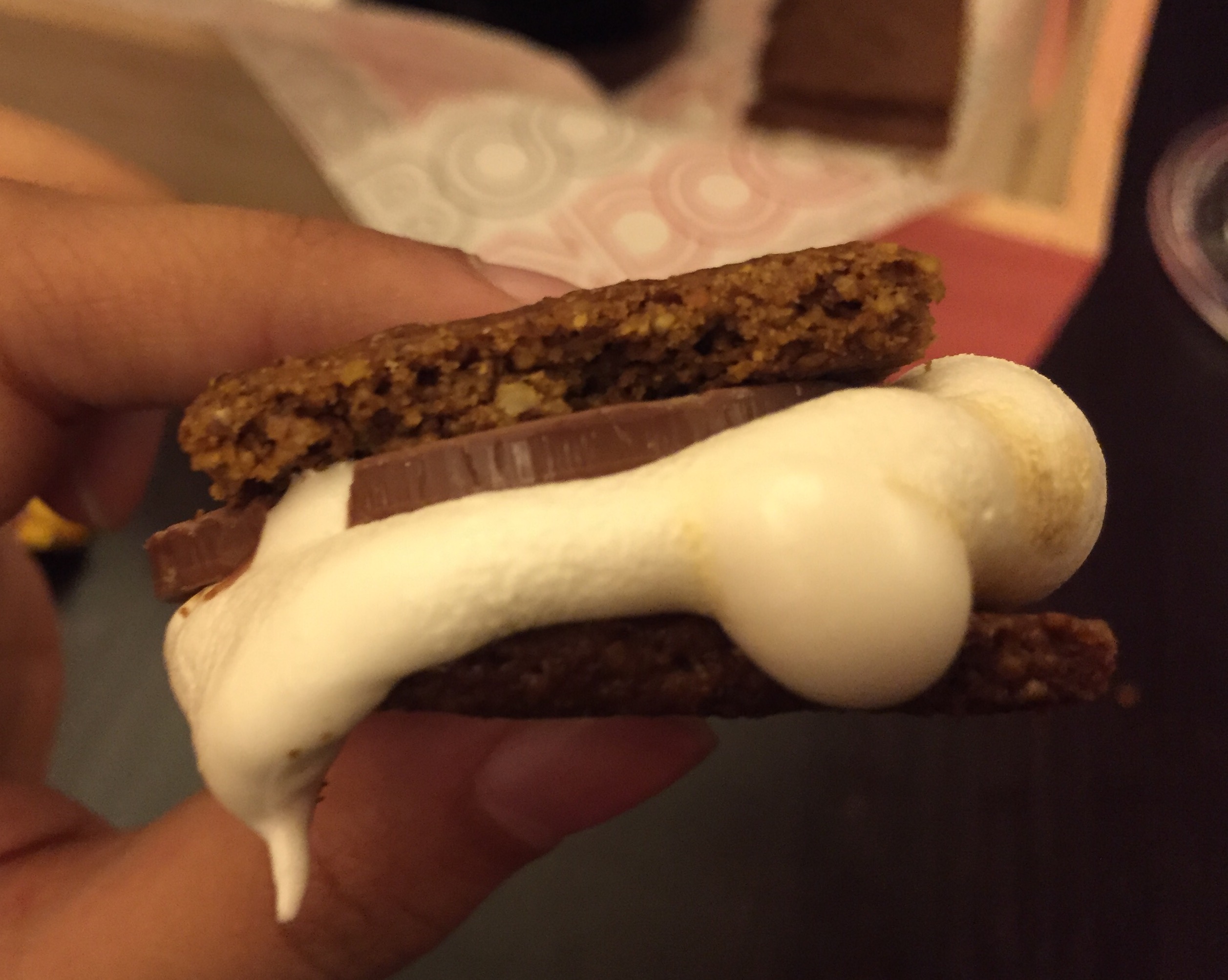 I loved it so much and found it really fun to make. 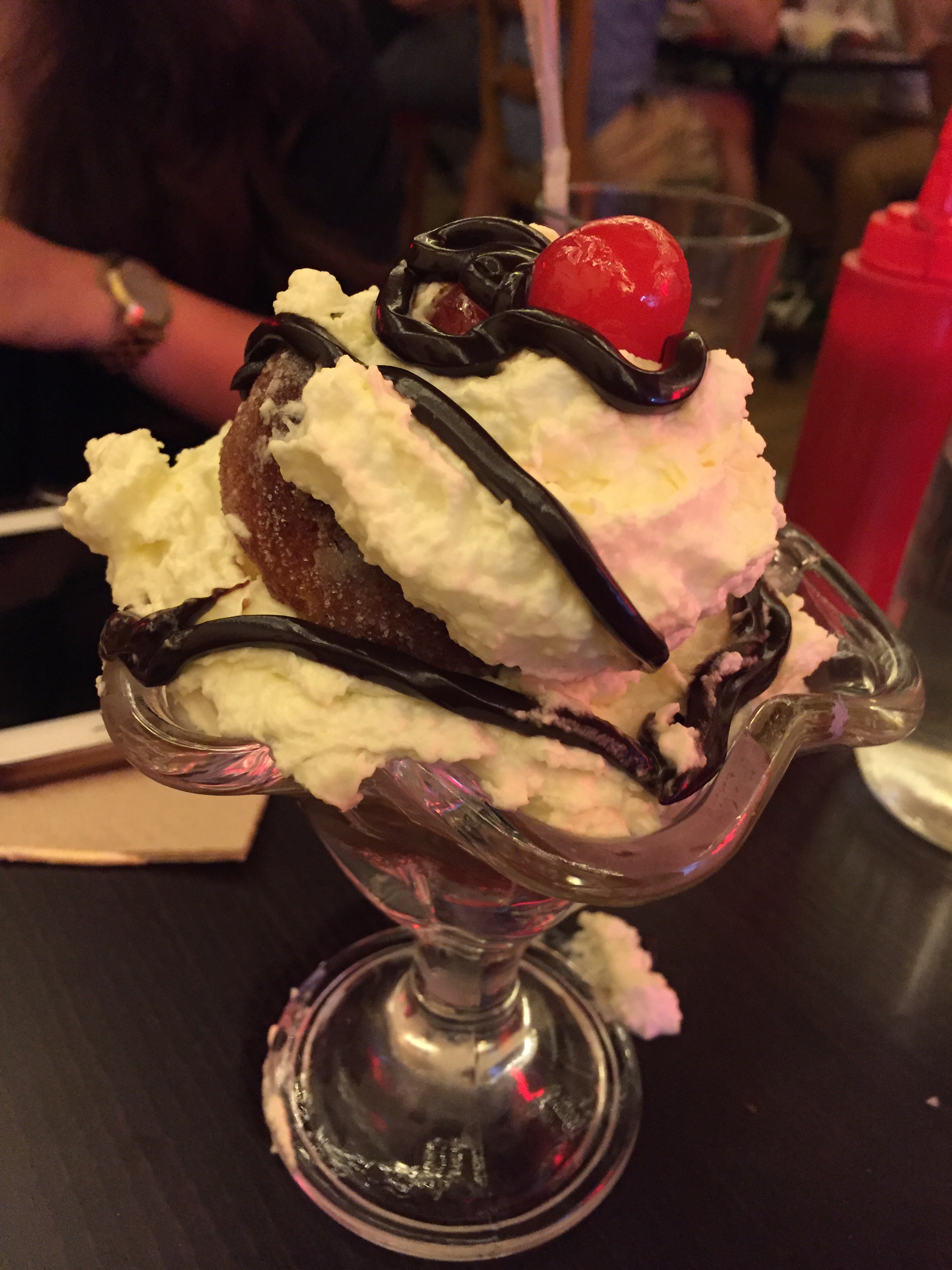 A doughnut muffin yaaaas, topped with a huge amount of cream and doused in butterscotch and cherries. Omg we devoured this so quickly!

We left Boondocks feeling fat, full and most definitely satisfied. With 50% off we paid just over £10pp. We had a bit of a rocky start with the long wait, drinks and starters but were super happy by the end of the night. Service was not amazing, however considering it was the first night they opened I can’t complain too much! I came for the food and Boondocks definitely delivered! 😀